How many of yall chew?

Sure, it's a nasty habit.... So is smoking, right? I've done both and I really don't like to smoke, although something they put in beer makes a cigarette taste amazing!

I did a little reading out of curiosity and discovered that US Smokeless Tobacco Company makes Copenhagen/Cope, Skoal, Husky, and Red Seal.


I started on Copenhagen straight, then went to Copenhagen wintergreen. After that I switched it up a little and went over to Skoal for a while. I've tried the pouches because they gave out an ass load of coupons, Skoal Extra mint, Skoal Extra wintergreen, Skoal citrus, and their apple blend. All of it long cut, can't stand fine cut! A lot of flavors seem to be regional or they just don't carry them near me. I had also quit for several months, cold turkey. Just lost my taste for it all together, but picked it back up. Not nearly as much as I used to though.

Anyway, if it's your vice like it is mine, what brand/flavor do you prefer and what does it cost?
'02 2500HD
Duramax, CCSB
Super Duty Dana 60
Radius Arms & Coilovers

I keep a zip lock bag of ground up bacon in my pocket. Keep a pinch in my lip all day. The ladies love it!
A rationalist epistemology claims that knowledge (as opposed to opinion) is possible only if it is based on self-evident and absolutely certain principles. Such principles are not learned through experience; instead, they are implicit in the very notion of reasoning itself. Sense experience cannot provide the certainty needed to guarantee that what we claim to know is true. So, like mathematicians, we have to rely on reason itself as the basis for determining whether our opinions are justified true beliefs (that is, knowledge).​
-Plato​

Still the best smelling thing in the world to me a fresh opened can of copenhagen
"Well up 'til now my plan went all right, until we tried to put it all together one night, and thats when we realized something was definitely wrong"
-Cash

I've probably tried them all. Copenhagen straight is what I've stuck with the longest, But Cope southern blend has been on sale lately and I think I have switched to that. Like tireburner said stokers wintergreen is pretty good, in fact its the only wintergreen I like.
00' toyota pickup, sliver with dents

Started on Cope long cut...then got broke and went to grizzly. Went back to cope long cut, got sick of them only filling the tin half way. I've tried the different Skoal flavors and used to mix it with my Cope. For the last couple years, I go through a tin and a half a day of Cope Wintergreen.
Because Race Shop - Left Eye Blind Racing Shenanigans

Standing by my guns and Bible since 1986

I started on my first deployment many moons ago. Then for some reason I quit and went to dipping coffee grounds. Still do to this day.
Tread Lightly Master Tread Trainer

Proud member of Aravaipa Hotshot Crew for 2016 in AZ. Will be a Hotshot this year.

Coffee grounds? Had a guy tell me he saw someone once buy coffee beans at the mall and chew them straight. I'm an energy drinkaholic so this is very interesting.

I dip when I'm doing nasty jobs?? Really muddy, dirty or greasy. And when I fish. Just gets my mind off of the nastyness I guess? And when I need to get something done after I've been drinking and got a buzz on. Chew tobacco sobers me right up.

Skoal peach lc has been my fave and I've tried them all. Southern Blend was too dry for me?

I have asthma from my parents smoking. My mom said she smoked when she was pregnant. We played in a haze all my life so I could never smoke...

But I could never be a full time regular user for chew produces way too much hockage after a while of using it that can last for days.

I'd be lost if I couldn't dip at work! I used to go through at least a can a day and would buy it by the tube, but now I just dip two or three times a day. Usually I only dip at work...it keeps me from going postal upside somebody's head.

My favorite was/is cope straight long cut with grizzly straight long cut right behind that. I've all but quit, ill throw a pinch in everyone in while, def not an easy habit to quit. The stokers is pretty good I've had that before but there cut quality isn't near what grizzly or cope is, there long cut is very long.


Sent from my iPhone using Tapatalk 2

Skoal wintergreen for me. I smoked since I was 16, quit last year, need to lay down the worm dirt too.
13 Rubicon 35,s stuff
CAROLINA TRAIL BLAZERS
Death smiles at everyone, Marines smile back!
J&J Broken Skull Garage

Haha worm dirt. Im only 22, i started to dip when I was 15. I dip Longhorn Finecut Natural.. or Redman FIne cut Natty. I HATE long cut anything. I used to be just the opposite. ONce you learn to dip fine cut, it has a much better taste IMO. Not a big fan of wintergreen unless its Skoal fine cut. But I only dip that when I get my taxes back

Redneck92 said:
Whats the plan? Mall crawler? Trail rig? Weekend warrior? This has potential to be a very good jeep, if there is such a thing

Timberwlf long cut winter green.1.69 a can. If iever have to pay more than. 2 dollars a can I will quit

I used to dip until about 5 years ago. After spending about $12k on oral surgeries, crowns and dental procedures I decided to take care of my teeth and gums.
That being said, like Ron said I can smell a can of snuff and my mouth waters. Never again though.
5.0 Ranger Truggy
Dents, stickies, fun.

I smoked for 20+ years, quit twice before stopping but continued to dip Skoal wintergreen for years. When the price went up to high I switched to Grizzly fine cut and recently 1800 long cut too, but really need to quit. I don't enjoy it like I did, it's now just a nasty habit and I need some intensive dental work like Jody described.
fair to middlin

put a chew of red man in as soon as i got up every morning and chewed non stop all day till i went to bed.3 packs a day.depending on what state i am working in it cost between $4.00 to $7.00 a pack. about 8 months ago several people told me i would never be able to quit,so i threw away the 2 packs i had and quit just to prove i could. kinda wish i had not done that but i will never go back to chewing and let anyone think i could not do it.

ive smoked more than anything 14yrs pack a day... i quit on my birthday this yr (march)
but i chew backer once to twice a day red man golden blend. pack it in like a baseball lol i also like stokers tenn chew but its a little sweet to my taste.

I dipped for 19 years an then about 3-4 years ago there was yet another Tax hike on tobacco. It pissed me off enough that I spit it out and quit... So to speak. Once in a while I'lll have another if I'm drinking with other buddies that are having one.

Recently tried that Camel Snus. I don't see how Camel gets say with calling it Snus. It's nothing like the real deal Snus. It a Swedish product that is a fine ground moist tobacco that you pack into a ball. I'm talk fine ground like moist dirt. I was highly disappointed. 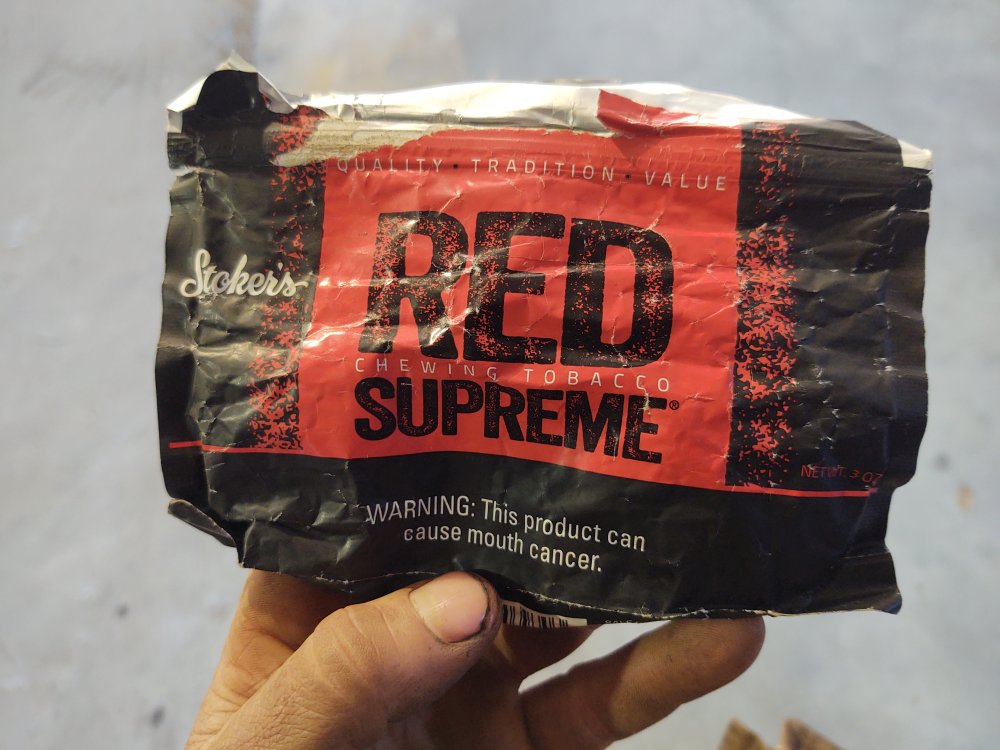 Well since this is bumped, I dip, I don’t call it “chew” because you don’t chew it. My dad chewed beechnut for 50 years so I guess I grew up knowing what real chewing tobacco was.

Thanks for your taxes 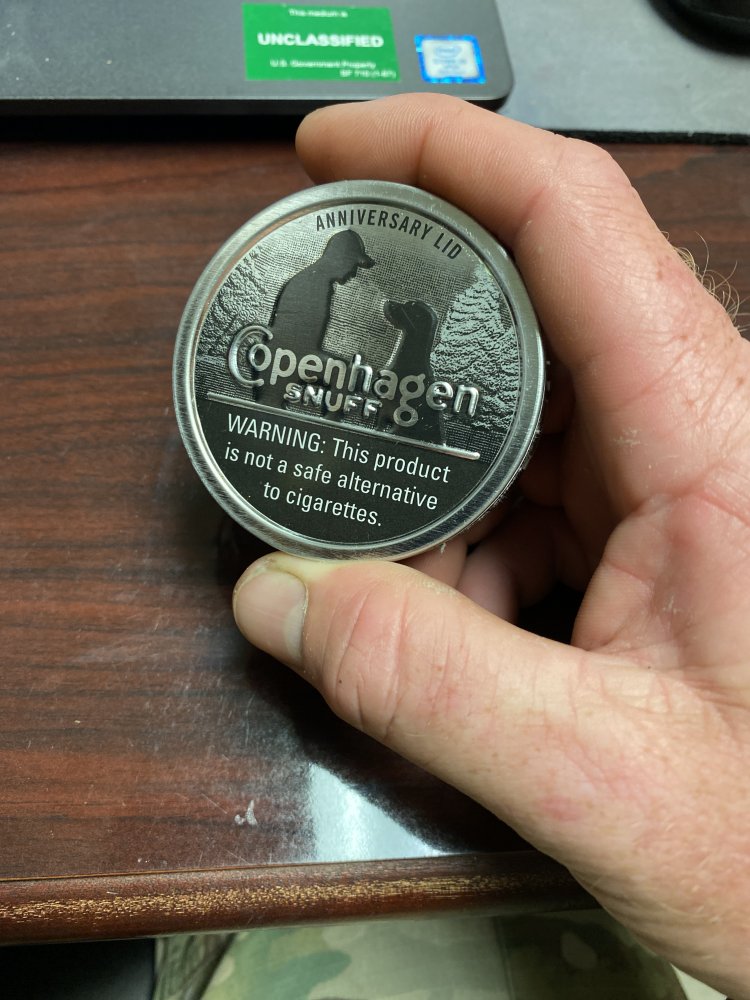 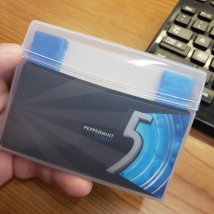