If you've got the ability and opportunity... and you're NOT doing it... then you're doing it wrong.

Events...
We're compiling a list of events scheduled for the first half of 2012. Get out your calendars!

The 2012 Griffin King of the Hammers is February 10, 2012, less than five weeks away! Hammer Town officially opens February 3rd, on the lake bed.

The Gulches Presidents Day Run Weekend will be Friday, February 17 through Monday, February 21, 2012. A preregistration discount form can be found on the Gulches home page.

The ECORS 2012 schedule has been posted! The season opener will take place at The Flats in Marion, NC, on March 17. 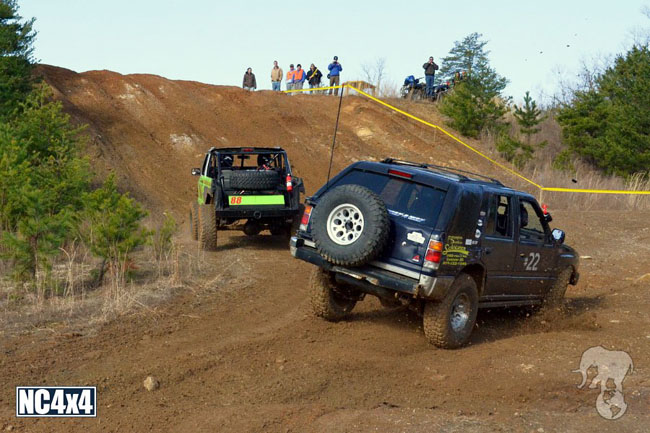 The 4x4cross Season Opener and National Throttle King Qualifier Weekend will kick off on Thursday, March 29, at the Dirty Mo' with DOT Light & Heavy Comp Pulls. The weekend will include the Third Annual Efird Memorial Ride at the Devils' Playground on Saturday, March 31.

The trails at Uwharrie National Forest open for 2012 at noon on Friday, March 30!

The First Annual Uwharrie Off-Highway Vehicle Jamboree will celebrate the early opening of the trails at UNF! Hosted by the Eldorado Outpost and the Uwharrie Off-Road Training Center (UORTC), the Jamboree will include a Swap Meet, vendor booths and a Spartan Race (mud run), March 30 - April 1, 2012. The website will be updated soon with a list of vendors.

The Straight Diesel Season Opener Sled Pull and Mud Race will be April 14, 2012 in Peachland. Rules for this and several other regional venues have been posted in the 4x4Cross forum.

Rock Corps 4x4 Club will host an Open Invite and Benefit, Down and Dirty For Life, on April 20-22, 2012. The gates will open at 9am on Friday and close at 5pm on Sunday. Admission is $10 per rig, $10 per person, kids 16 and under are free. Camping is free. Fees go to benefit the American Cancer Society.

The Spring Farm weekend, hosted by the Big Dixe Boggers, is scheduled for May 4-6, 2012.

The second 2012 ECORS race will take place on May 19, at The Great American Park in Auburn, AL.

The Farmington Dragway Straight Diesel Pull and Mud Race will be June 9, 2012, in Mocksville, NC.

The Bottomland4x4 Annual Bog For Charity will be June 16, in Mount Airy, North Carolina.

News...
For the first time, starting order for King of the Hammers main race will be determined by a qualifying race. More than 70 Last Chance Qualifier contestants will be competing for one of 20 spots remaining... while 90 pre-qualified racers will be competing for their starting order in the 2012 Griffin King of The Hammers. The qualifying races will take place Tuesday and Wednesday, February 7 & 8, on the 4Wheel Parts Qualifying course. Some of the qualifying races will be televised during the Ultra4 “Happy Hour”.

ECORS veterans BJ Allen, Sean Rose will both qualify on Wednesday. It also looks like the rumors are true and Robby Gordon will race KOH!

Robby Gordon won Stage 9 of Dakar 2012 yesterday but still trailed leader Stephane Peterhansel by 5'58” in the general standings. Co-driver Johnny Campbell said, "RG was matted at 205kph! Omg I was freaking out!!!" Gordon/Campbell are closing the gap in Stage 10 today.
This is an automatically generated message.

"On completion of the 9th stage (Antofagasta-Iquique), following observation of technical non-compliance on vehicle No. 303 (Robby Gordon) (article 1P and 3P of the technical rules), the Car Race Officials’ Committee has decided to disqualify No. 303 from the race.

The driver has appealed against this decision. During appeals, decisions are placed on hold. As a result, vehicle No. 303 will continue the rally until the outcome of the appeal."
-Cydney Clemons

if you watch his interview after stage 10 you can see that he's not penalized or DQ'd. but gets to appeal... not sure what to appeal... said its the same system that was approved last year as well

Looks like car trouble for RG during Stage 11... looks like he's tentatively in 4th for the day, though?

wranglerrambler said:
if you watch his interview after stage 10 you can see that he's not penalized or DQ'd. but gets to appeal... not sure what to appeal... said its the same system that was approved last year as well[/QUOTaaa
Sounded like a nascar type answer to me. Just beause they did not catch it last year does not mean it was "approved".
Click to expand...

It gets more interesting...

From the Dakar Live Feed for Stage 12: "American Robby Gordon has just crossed the finishing line with an amazing time of 2:14'32”, meaning he finishes 15'18” ahead of the previous best performer of the day, Russian driver Novitskiy. To the Hummer driver's credit, he attacked constantly and made no mistakes in the dunes. With the leaders aiming at protecting their leads in the general standings, this performance has to be put into perspective, even if it is spectacular."